They say time is the most valuable gift you can give someone. This is certainly an adage that Matt lives by as he builds a relationship with Yusuf, a 19-year old Somali refugee that came to live with his family over a year ago.

“Just spending time with him even when it doesn’t seem like he notices it or acknowledges it, it matters,” Matt says. Time has been what has allowed Matt and Yusuf to build a sense of trust and mutual respect over the past year.

The foundation of their relationship came not only from 3-hour conversations on the family’s back porch– though those came later– but from driving in the car.

On a trip to Costco, Matt found that when the two of them were alone in the car, Yusuf was more talkative. So Matt took him on a number of car trips, including a college reunion in Ohio and a family reunion at the Iowa State Fair. There, Yusuf was introduced to Matt’s extended family, which Matt jokingly described as, “a bunch of overly friendly midwesterners trying to talk to a kid who probably would have rather been playing soccer on his phone.”

Matt even flew to Boston with Yusuf, then they drove to Lowell, Massachusetts so that Yusuf could spend time with his cousin, Yusuf’s only family in the United States. Matt was expecting that Yusuf would want some time alone with his cousin, a man in his early 20s living with other recent Somali immigrants. He was pleasantly surprised when Yusuf asked Matt to spend the day with them.

Matt went with Yusuf to his cousin’s apartment, and after spending some time drinking tea with Yusuf’s cousin’s roommates, the three of them explored Boston. They went to a Somali restaurant, and an observation deck overlooking the city with an exhibit about immigrants arriving in the US. 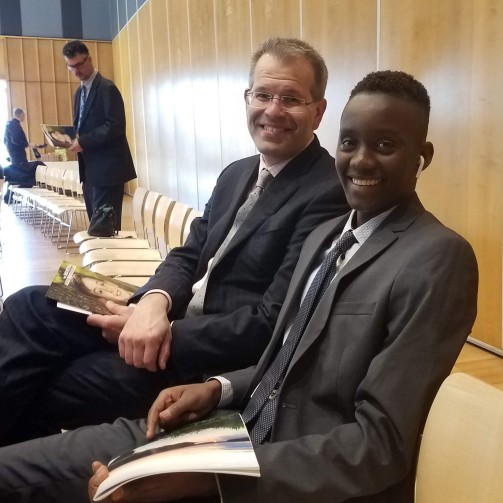 Matt’s primary goal has been to demonstrate that he has Yusuf’s best interests at heart by spending time with him. Bridgette, Matt’s wife, says that when Yusuf wants to talk man to man with Matt, Matt will put his work email aside and sit on the back porch for hours. They talk about everything from Yusuf’s future to criminal justice. “I’m a lawyer and criminal defense attorney, and, coming from Somalia, he has very different ideas about justice and fairness, so talking about that with him has been interesting,” Matt says.

Matt even had the opportunity to talk to Yusuf’s mom, who Yusuf was finally able to get in touch with after months of not knowing where she was or whether she was alive.  Yusuf had to translate. “I tried to say he was a good kid and that he is a blessing to us. She just kept thanking me,” Matt said. “It probably would have been a better conversation if I spoke Somali or she spoke English.”

Matt plans to keep building on his relationship with Yusuf over the next few years, likely over more back porch and carride conversations. “People make families in a lot of different ways. Even though I’m not his father and wouldn’t presume to be, it’s a lot like fatherhood. I just try to show him that I’m near him and I’m interested in what he has to say.”

* LSSNCA is happy to serve the DMV with Unaccompanied Refugee Minor foster care programming. Interested in fostering a URM youth? Fill out our inquiry form online and watch our Lunch & Learn conversation with a URM Foster Mom.