Here are 40 facts about the Refugee Act of 1980, its implementation, and the current policy environment affecting refugee resettlement.

Fact 1 – On March 17, 1980 President Jimmy Carter signed the Refugee Act of 1980 (Public Law 96-212), which established the modern system of resettlement of refugees and asylum-seekers in the United States.

Fact 2 – grew out of a series of hearings held by the Senate Judiciary Committee’s Subcommittee on Immigration, Refugees and Border Security from 1965 to 1968, which recommended that Congress create a uniform system for refugees.

Fact 4 – was a congressional response to the large increase of Vietnamese and Cambodian refugees as a result of the Vietnam War.  Congress wanted to establish a new system of immigration and resettlement through a clear and flexible policy.

Fact 5 – declared that it is the historic policy of the United States to respond to the urgent needs of persons subject to persecution in their homelands, including humanitarian assistance for their care and maintenance in asylum areas, efforts to promote opportunities for resettlement, aid for necessary transportation and processing, and the admission to this country of the refugees of special humanitarian concern.

Fact 6 – declared that it was also the policy of the U.S. to encourage all nations to provide assistance and resettlement opportunities for refugees to the fullest extent possible.

Fact 7 – changed the prior law definition of refugee to a person outside the country of such person’s nationality with a well-founded fear of persecution on the basis of race, religion, nationality, membership in a particular social group, or political opinion, a standard that had been established by United Nations conventions and protocols.

Fact 8 – raised the annual ceiling of admitted refugees from 17,400 allowed under earlier immigration law to 50,000 and it created a system for the President to review and adjust upward for the next twelve months the ceiling to meet unforeseen emergency humanitarian concerns.

Fact 9 – requires annual consultation, before the start of the fiscal year between the President and the House and Senate Judiciary Committees, on the number of admissions, the so-called Presidential Determination.

Fact 10 – authorized the Attorney General to establish a procedure for a person physically present in the U.S. or at a land border or point of entry to apply for asylum and for the Attorney General to grant asylum if the person meets the definition of refugee.  A spouse or child of such asylee may be granted the same status if accompanying, or following to join, such person.

Fact 11 – provided that a person who has been admitted to the U.S. and physically present in the U.S. for at least one year and who has not acquired permanent resident status shall be examined by an immigration officer and if eligible be granted lawful admission to the United States.

Fact 12 – provided that the Attorney General shall not deport any refugee if the Attorney General determines that such person’s life or freedom would be threatened in such country on account of race, religion, nationality, membership in a particular group, or political opinion.  However, this provision does not apply to anyone convicted of a serious crime or poses a threat to national security.

Fact 13 – authorized establishment of a new Office of Coordinator for Refugee Affairs charged with the responsibility to coordinate all refugee and resettlement policy both within the U.S. and internationally.

Fact 14 – established the Office of Refugee Resettlement (ORR) within the Department of Health and Human Services (HHS) headed by a Director.  The function of the Office is to fund and administer resettlement programs of the Federal Government.

Fact 15 – requires ORR to make available to refugees sufficient resources for employment, training and placement in order to achieve economic self-sufficiency as quickly as possible, provide opportunities for refugees to acquire English language training, and ensure that cash assistance is made available so as not to discourage economic self-sufficiency, and ensure that women have the same opportunities as men to participate in training and instruction.

Fact 16 – requires ORR to consult regularly with state and local governments and private non-profit voluntary agencies concerning the refugee sponsorship process and the intended distribution of refugees among states and localities.

Fact 17 – requires that in allocating resources the Office of Refugee Resettlement is to avoid duplication services and provide for maximum coordination between agencies providing related services.

Fact 16 – provides that no grant of assistance may be made unless an appropriate proposal, including a description of the agency’s (such as LSSNCA’s) ability to perform the services specified, is approved by the appropriate administering official.

Fact 18 – requires that a state, as a condition for receiving assistance, shall develop a plan that describes how the state intends to encourage effective refugee resettlement and promote economic self-sufficiency as quickly as possible, a description on how the state will insure that language training and employment services are made available to refugees receiving cash assistance, designate a person responsible for insuring coordination of public and private resources in refugee resettlement, provide for the care and supervision and legal responsibility for unaccompanied refugee children in the state, identifying refugees who at the time of resettlement have medical conditions requiring treatment and monitoring, and meet standards, goals and priorities established by ORR and providing reports thereon.

Fact 20 – requires ORR to develop programs for orientation, instruction in English, and job training for refugees, and other education to facilitate their resettlement in the United States.

Fact 21 – authorizes the Secretary of HHS to make arrangements for temporary care of refugees in emergency circumstances, including the establishment of processing centers with an adequately trained staff to identify refugees that have medical conditions that require appropriate and timely treatment.

Fact 22 – authorizes ORR to provide assistance for special educational services, including English language training, to refugee children in elementary and secondary schools where a demonstrated special need has been determined.

Fact 23 – authorizes ORR to provide assistance to public and private non-profit agencies for the provision of child welfare services, including foster care maintenance payments and services and health care for any refugee child for a three-year period.  If the refugee child is an unaccompanied minor the above services may be provided until the child is 18 years of age.

Fact 24 – requires ORR to arrange for the placement of unaccompanied refugee children as soon as possible after their arrival and to take legal responsibility, including financial assistance, and to make necessary decisions to provide for the child’s immediate care.

Fact 25 – authorizes ORR to provide assistance to public and private non-profit agencies (like LSSNCA) for up to 100% of the cash assistance and medical assistance, plus reasonable administrative expenses, to any refugee during the three-year period after the refugee has entered the U.S.

Fact 28 – provides that if a refugee is entitled to benefits under the Social Security disability benefits, Supplemental Security Income or the Medicaid programs, funds available from this Act may be used only to pay the non-Federal share of such programs.

Fact 29 – authorizes ORR to allow for medical assistance under Medicaid to any refugee for a period of one year after entry who does not qualify under Medicaid if it determines that it will encourage economic self-sufficiency or avoid a burden on state and local governments and the refugee meets alternative financial resources and income requirement as the Office shall establish.

Fact 30 – authorizes to be appropriated for FY 1980 and for each of the two succeeding fiscal years “such sums as may be necessary” (this is called an open-ended appropriation) for the purpose of providing initial resettlement assistance, cash and medical assistance, child welfare services and $200 million for each of FY 1980, 1981 and 1982 for carrying out any other provisions under this Act.

Other federal action affecting refugee resettlement in the United States:

Fact 31 – Congress has recognized the need to assist those foreign nationals who helped U.S. troops during the Iraq and Afghanistan wars through the authorization of Special Immigrant Visas (SIV) allowing their entry. For FY 2019 and FY 2020 Congress provided 4,000 for each year.

Fact 33 – This continued reduction in the cap has seriously undermined the ability of resettlement agencies like LSSNCA to maintain the critical infrastructure to effectively resettle clients.

Fact 34 – America has periodically experienced anti-immigrant fervor.  Resettlement of Vietnam refugees in the 1970s was unpopular.  One poll in 1975 showed little for welcoming them with 37% for, 49% against, and 17% uncertain. 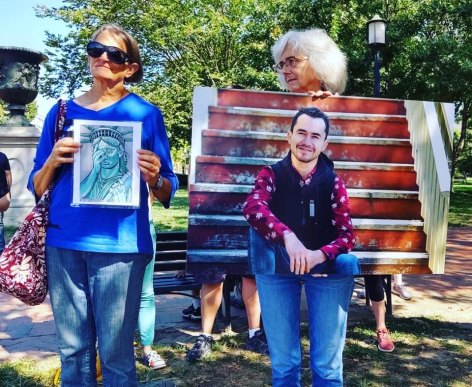 Fact 35 – The United States has banned refugees from 13 majority Muslin countries from immigrating to the United States.  The so-called Muslim Ban was recently upheld by the U.S. Supreme Court.

Fact 36 – Through its “zero tolerance” policy, the Administration has tried to end the pathway to family reunification.

Fact 37 – Through its Executive Order (EO) on “Enhancing State and Local Involvement in Refugee Resettlement” the Administration attempted to allow Governors and Mayors to effectively veto the resettlement of refugees in their jurisdictions.  A Federal District Court in Maryland recently granted a temporary injunction to prevent enforcement of the EO.  The Administration has announced that it will appeal the decision.

Fact 38 – The Administration has revised the definition of public charge for determining whether a refugee, which has used public assistance such as food stamps, Section 8 housing assistance and other programs to be denied eligibility for entry into the Country or change its refugee  status.  A lawsuit succeeded in getting an injunction preventing enforcement of the rule.  However, the Supreme Court has ruled that the Administration may enforce the revised rule while the case is fully litigated

Fact 39 – The Administration has terminated the Deferred Action for Childhood Arrivals program put in place by the previous Administration.   This threatened at least 800,000 children who were brought to the U.S. by their parents who were not documented.  The case of whether the Administration can terminate the program is pending before the U.S. Supreme Court with a decision expected before the end of its current term.

Fact 40 – The Refugee Act of 1980 and its resettlement program is an enduring symbol of our country’s commitment to welcoming those fleeing persecution and created the first statutory basis for asylum through which people who arrive at the U.S. border can start new lives full of hope. May its promise soon be restored.

*LSSNCA is a refugee resettlement agency under the Lutheran Immigration and Refugee Services. We have been resettling refugees in the DMV since World War II. See our infographic below for more information regarding today’s refugee crisis and response. Discover 7 ways to help refugees in the DMV on our website!