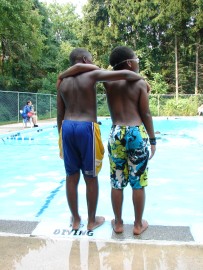 Timmy’s father, who is HIV positive, learned about Camp Kids Haven through a support group for widows and widowers that he had been attending since the death of his wife several years prior. Their family had been plagued with the stigma that often follows HIV /AIDS and it was difficult to outwardly mourn their family’s loss given the reason for her death. Timmy, only recently learning about his family’s condition, kept it to himself because he didn’t want his friends to think his parents were bad people. Because of the burden he carried, he suffered from severe anxiety and rarely spoke at all.

Timmy’s father heard about the fun, safe nurturing environment that the camp provides, and signed Timmy up hoping that he would find friends sharing in the same burdens. Throughout the week, Timmy began to open up to the other campers and counselors and was able to share his grief, fears, and most importantly his dreams for the future. During one of the camp’s art sessions, Timmy chose to write his father a note:  Dear Daddy: These 5 Days of Camp have been Real Fun. Thank you for signing me up.  From Timmy.

Since camp, Timmy’s father says that Timmy has been much happier and has been able to openly share his feelings with the family and even some kids at school. Timmy plans to attend camp next year and is excited to swim and roast marshmallows again.