An SIV Visa, or a Special Immigrant Visa, is a special category of immigration visas that apply to three categories of persons: 1) Afghans and Iraqis who have served overseas alongside American soldiers in Afghanistan and Iraq; 2) religious workers; and 3) those seeking employment-based visas with special circumstances. 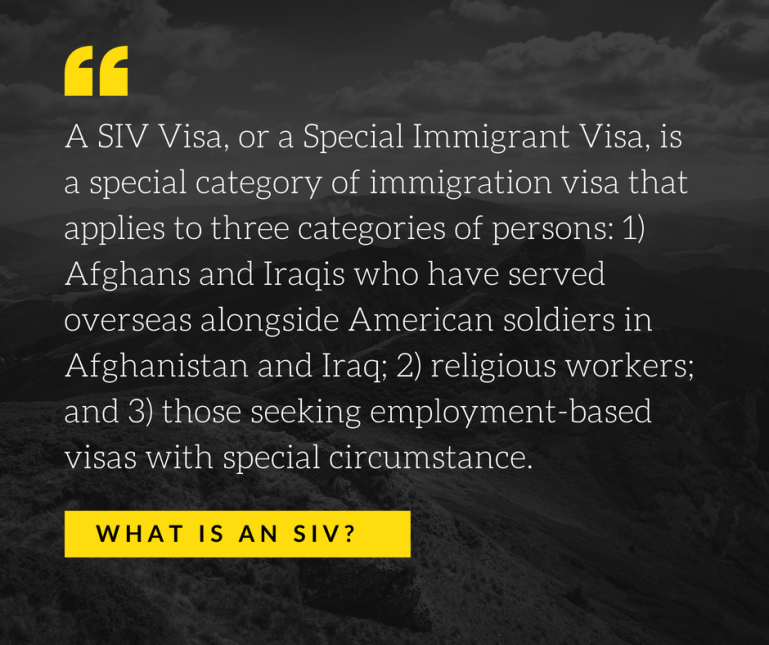 The SIV program issues visas in the following categories: Afghan-Iraqi U.S. employees (average of 4,722 per year, between 2007 – 2015; total amount varies per year based on visas granted), religious workers (5,000), and employees (140,000). The numbers of these available visas are subject to administration approval each year. In FY2018, the Trump Administration allocated 3,500 additional visas for Afghan applicants under the FY2018 NDAA for the SIV program.

The Trump Administration’s America First policies and Muslim-majority country bans have affected the SIV program at large, notably in the Afghan and Iraqi SIVs, and in the seasonal worker visas, which help to fuel a majority of summer harvesting seasons, as well as seasonal summer resort towns that often hire workers from the Caribbean. The Trump Administration approved the increase of certain Afghan visas, but has yet to release substantive data on those visas being issued.

Q: How does the SIV program work?

Candidates who meet these criteria must file a petition with USCIS (Form I-360), complete any other forms necessary, and then undergo an interview before being granted an SIV.

Q: Can anyone apply for an SIV?

Q: Once you apply, are you automatically granted a visa if you meet the criteria?

It is important to note that the U.S. upholds an extremely rigorous interview and qualification process for candidates to immigrate to the United States. This procedure is to ensure safety for U.S. citizens, as well as ensure that candidates meet qualifications for entry. The process is often lengthy, spanning years, and is highly bureaucratic, involving multiple forms and documents that can be difficult to interpret. Those who make it through this process are typically affluent in their country of origin, or extremely resourceful, contrary to popular belief. The process can also take enormous resources on the part of the applicant, costing up to thousands of dollars in form fees and other circumstantial items, such as interpretation services from English to local language, travel fees, and other such items.

A common misconception about immigrants and refugees is that they just simply cross a border and work illegally, or come to ‘mooch’ off the U.S. benefits system. While illegal border crossings do occur, the majority of immigrants and refugees pay taxes and add to the local and national economies across multiple industries. Those who have arrived legally have often worked very hard to gain admittance to the U.S.

Q: Can SIV holders get a Green Card or pursue U.S. citizenship?